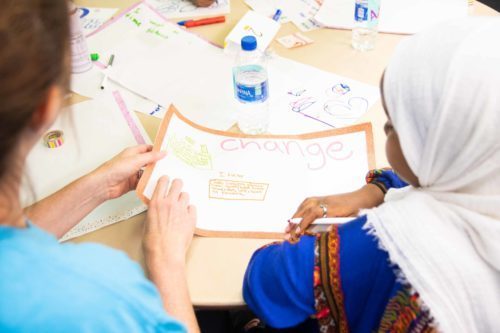 There is a story about rural America that is not being told.

Across the U.S. there are places where new immigrants are shaping the future of rural communities. Places where cities profoundly affected by globalization are driving new kinds of economic innovation. Places where social cohesion is strong and people look out for one another.

Places like Willmar, Minnesota, where in a city of 21,000 people, nearly half of the population is Latinx, East African, or Asian. Where the mayor helped new Somali immigrants convert an old childcare center into a mosque and Somali social entrepreneurs created a Community Integration Center where cultural exchange is truly bidirectional — Somalis learn about the culture and language of Willmar and Willmarites learn about Somali and Somali culture.

While urban areas have long been strongholds of diversity, rural areas are experiencing the most dramatic demographic shifts. This map from a Washington Post analysis shows the places across the country that have experienced the largest increases in diversity from 2000–2014 — and the places are predominantly rural.

Nine million students (or 18.7% of the student population in the U.S.) attend rural schools. Data from the Rural School and Community Trust found that 48% of those students are from low-income families, 25% are students of color, 13.5% have an individualized education plan, and 3.5% are English Language Learners.

Since our founding in 2002, the majority of World Savvy’s work has been centered around and anchored in, urban areas. But we knew that by limiting our work to urban areas, we were not just missing a huge population of students, but missing an opportunity to participate in the sea change that’s occurring in rural communities across the country.

Helping young people navigate change and collaborate better across differences has always been core to what we do at World Savvy. We knew what our work had to offer rural communities as they faced tremendous changes in both their demography and economies — and we knew that working together could sustain meaningful, long-term impact on whole systems of education.

With support from the Einhorn Family Charitable Trust and The Chapman Family Foundation, World Savvy activated our first regional “hub” in East Tennessee in 2017.

We’re partnering with stakeholders across the K-20 education pipeline — from graduate schools of education, community colleges, K-12 districts, schools and teachers, and local philanthropic partners to build a regional ecosystem focused on global competence and the development of 21st-century skills for work and life beyond the classroom.

In partnership with Somali Community Resettlement Services (SCRS), a steering committee comprised of parents, students, teachers, and school administrators, and Minnesota State University–Mankato, we’re working to build a blueprint for the inclusion of Somali students in Southeast Minnesota.

And the work is just beginning. With every rural hub we activate, we’re co-creating an inclusive vision for rural education ecosystems across the country.

In the rural communities I’ve visited since we began this work, I’ve learned that change moves at the speed of trust. It’s like nothing I’ve ever experienced in urban or suburban areas that are either more transient or more socially segregated. These are communities where when someone’s husband falls ill, their neighbor takes care of their farm or their kids for weeks on end without question. They literally keep one another alive. It’s a very different picture than the story we’ve been told about in rural America.

While I see many reasons to be hopeful, I also know that change can be difficult — and we don’t always have the skills or knowledge to work together across differences. America is only beginning to reckon with the terrible legacy of oppression that is a part of our country’s history and present. There is much work to be done.

As we face this change as a nation, it is imperative that all of us have the skills to collaborate with others whose backgrounds are different from our own. It’s essential that we lean to complexity in with curiosity, challenge our assumptions about that which we don’t yet understand, and work together to build a more inclusive future. This work belongs to all of us and we don’t do this work alone. We’re expanding this work across the country and would love to hear from you if you think we should partner with your community. Reach out to start the conversation. We love hearing from you.